Mineral news and specimens in our shop 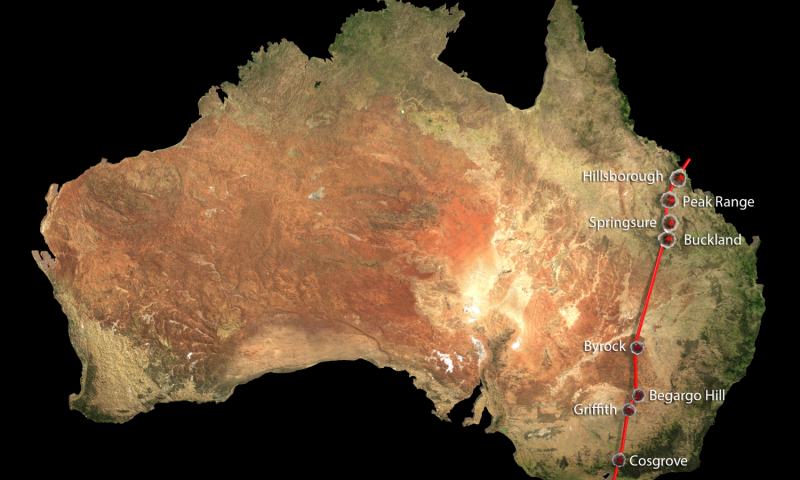 Scientists have discovered the world’s longest known chain of continental volcanoes, running 2,000 kilometres across Australia, from the Whitsundays in North Queensland to near Melbourne in central Victoria.

The volcanic chain was created over the past 33 million years, as Australia moved northwards over a hotspot in the Earth’s mantle, said leader of the research Dr Rhodri Davies from The Australian National University (ANU).

“We realised that the same hotspot had caused volcanoes in the Whitsundays and the central Victoria region, and also some rare features in New South Wales, roughly halfway between them,” said Dr Davies, from the ANU Research School of Earth Sciences.

“The track is nearly three times the length of the famous Yellowstone hotspot track on the North American continent,” said Dr Davies.

This kind of volcanic activity is surprising because it occurs away from tectonic plate boundaries, where most volcanoes are found. These hotspots are thought to form above mantle plumes, narrow upwellings of hot rock that originate at Earth’s core-mantle boundary almost 3,000 kilometres below the surface.

The study, published in Nature, found that sections of the track have no volcanic activity because the Australian continent is too thick to allow the hot rock in mantle plumes to rise close enough to the Earth’s surface for it to melt and form magma.

Nearly Two-Thirds of Earth’s Minerals Were Created by Life

Rocks helped give life its start—serving as storehouses of chemicals and workbenches atop which the key processes sparked the complex reactions that now power living things—so it only seems fair that life may have returned the favor. “Rocks create, life creates rocks. They’re intertwined in ways that are just now coming into focus,” Robert Hazen, a research scientist at the Carnegie Institution of Washington’s Geophysical Laboratory, told NOVA.