China has been important for decades with many spectacular fossils discovered. Dinosaurs in particular are present in a diversity found nowhere else. Many people will recall the astonishing news of the first feathered Dinosaur fossils found here. Dinosaur nests are found with regularity and are now seen in many Museums globally.

In March 2016 I traveled to China for business, where I met with the Director and Assistant Director of The Geological Museum of China in Beijing. We discussed Chinese fossils laws, including local Chinese private and state ownership, import and export and also cultural loans of significant fossils specimens to international museums.

Beijing is fortunate in having some top class private mineral and fossil galleries. I was able to visit one.

As one would expect there were many high quality natural mineral specimens for sale, like the massive gemmy fluorite pictured right. But there were also some highly unusual articles carved in jade, like this enormous cabbage shown below:

So much to see, so little time! Moving on to the Beijing Natural History Museum:

Another purpose of my trip to China was to inspect a long term project featuring Mookaite from my mine for architectural use.

There are very few factories that can produce this type of work. 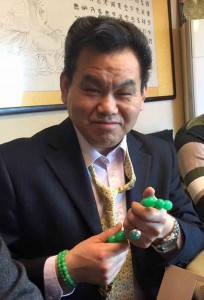 Next up was a visit to some Chrysoprase merchants.With my limited Chinese language skills, the Translation App was an enormous help.

They had a supply of very fine gem grade material from Marlborough, Queensland, Australia, a mine that has been held for decades by overseas owners.

It is astonishingly rare to see this type of gem grade.