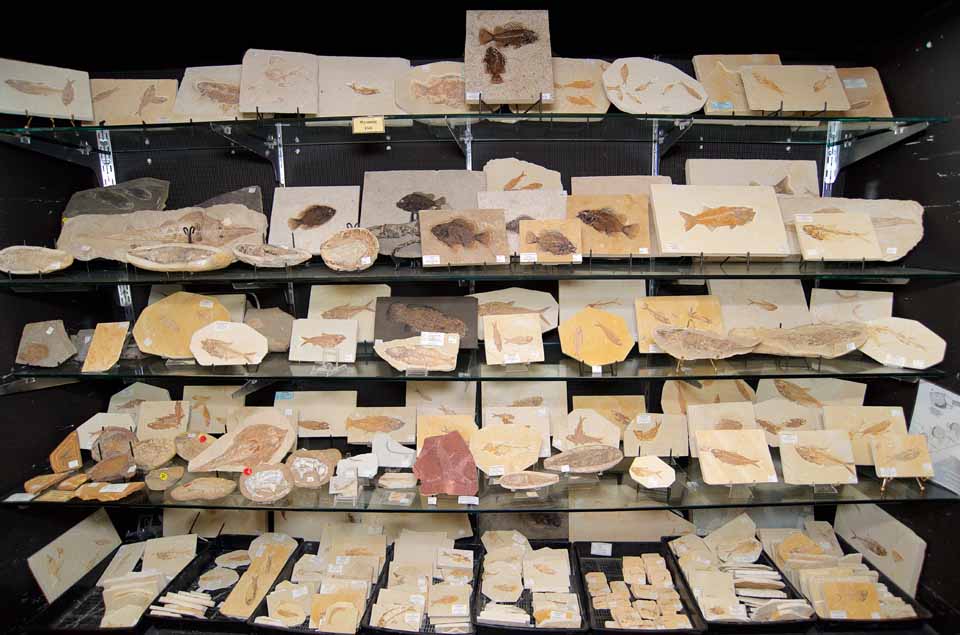 Crystal World employs two full time Paleontologists who have the arduous job of revealing fossil specimens from chunks of rock, and restoring them to the spectacular specimens we have on offer today

The word ‘fossil’ comes from the Latin word fossus, which means ‘dug up’. This refers to the fact that fossils are the remains of past life preserved in rock, soil or amber. Generally, the remains were once the hard parts of an organism, such as bones and shell although, under exceptional circumstances, soft tissues have also fossilised. There are different types of fossils because remains can be preserved in a variety of ways.

Trace fossils are the preserved evidence of an animal’s activity or behaviour, rather than the remains of the animal itself. Examples of trace fossils that have been found include:

Fossils with some organic material preserved

Animal and plant remains can undergo a variety of physical and chemical changes during fossilisation. This results in fossils showing varying styles and degrees of organic preservation:

These fossils are formed when organic matter in remains is gradually replaced with minerals, ultimately turning the remains to ‘rock’. Types of replacement include:

When are ‘fossils’ not fossils?

Some examples of natural geological formations that may be mistaken for fossils are concretions. These are rhythmic deposits of iron around a node/core that may be organic e.g. the root of a tree. Dendrites are another formation that can resemble fossils of leaves but are of a mineralogical origin.

Common perceptions of what a fossil is and what it should look like are often a long way from the reality. Often we have a ‘it looks like something therefore it is’ mindset, and it can sometimes be very difficult to convince someone that their valued specimen is not what it appears to be and that it may not be of great value. However, many of these mineral formations are just as interesting as fossils.

I have found some bones. Are they fossils?

Bones that are dug up from the ground may not always be fossilised.

The Australian megafauna became extinct within last 20,000 years and were reasonably common in New South Wales. Their fossils are most easily identified by the size of long bones and by the teeth. Skulls and jaws with teeth should be referred to Australian Museum Palaeontology staff if they can’t be identified as recent bones.

A comparison with the bones of domestic and native animals can be helpful. Marsupials have distinctive premolars that are virtually species-specific. search & discover at the Australian Museum has a wide range of bones from commonly found species, as well as identification guides.

From the Australian Museum

Of Mammoths and Men

Ancient hunters killed woolly mammoths for their meat. Today in Russia’s Arctic the search is on for their valuable tusks.

One last chance. That’s all the Siberian hunter wants. For five months Karl Gorokhov has tracked his ancient prey across a desolate island in the East Siberian Sea, slogging 18 hours a day over the icy tundra. He is cold and exhausted, with a hunger so primal that he has been reduced to eating seagulls. Even the two polar bears that attacked his camp were famished; their stomachs, slit open after they were shot dead, were empty. Gorokhov, a 46-year-old with wind-chapped cheeks and a scraggly, reddish beard, heads out every day past the nine graves near his camp—the final resting places, he presumes, for unlucky souls who came to the island to escape the Soviet gulag.

Gorokhov is running out of time. Late summer blizzards are howling across Kotelnyy Island, 600 miles north of the Arctic Circle, and the deep freeze of another northern winter looms. His fingers and palms start to itch. It’s “a lucky sign,” Gorokhov said later. The itching usually strikes when he’s on the verge of finding what he’s looking for: the ivory tusks of a mammoth.

The shaggy giants that roamed northern Siberia during the late Pleistocene epoch died off about 10,000 years ago, though isolated populations lingered on islands to the north and east, the last dying out some 3,700 years ago. The mammoths’ tusks, which could spiral to more than 13 feet, are reemerging from the permafrost—and fueling a trade that benefits the people of Arctic Siberia, including the native Yakuts, an Asiatic ethnic group that speaks a language of Turkic origin. For nearly a decade Gorokhov has been a tusk-hunting pioneer, exploring one of the world’s most inhospitable expanses. Now, trusting his itchy fingers, he scours the tundra until he almost trips over the tip of a tusk. “Sometimes the tusk just appears in front of you,” he says, “as if it were guiding you all along.”

It takes Gorokhov almost 24 hours of continuous digging to extract the tusk from the pebbly ice below. The specimen that emerges is as thick as a tree trunk—150 pounds—and in near-pristine condition. Before hauling the tusk away, Gorokhov tosses a silver earring into the hole he has dug, as an offering to the local spirits. If he gets the ancient relic safely home, it could fetch more than $60,000.

The trade in mammoth ivory barely existed when Gorokhov was born in northern Siberia in 1966, on the same day, May 5, as his namesake, Karl Marx. He remembers as a child seeing rotting tusks on the banks of the Yana River, near his fishing village of Ust-Yansk. Free enterprise was banned in the Soviet Union, and many locals considered it bad luck to disturb the tusks, which some believed came from giant molelike creatures that lived deep under the permafrost.

Still, the ancient tusks held Gorokhov in their spell. Growing up in Yakutiya, a resource-rich region nearly the size of India that’s inhabited today by fewer than a million people and is officially called the Republic of Sakha, he was told that the Earth’s creator got so cold flying over this region that he dropped a wealth of treasures: gold, silver, diamonds, oil. But it was his schoolteachers’ real-life stories about 17th-century pioneers trading in mammoth tusks that captivated Gorokhov. Years later he would find library books with photographs of early 20th-century explorers: bearded men standing on Kotelnyy Island, dwarfed by mammoth tusks, their boats groaning with stacks of ivory. “I always wondered if more tusks were out there,” Gorokhov says.

Nobody, not even Gorokhov, imagined that mammoth tusks would become an economic lifeline for a region that had been largely abandoned after the shuttering of Soviet-era mines and factories. (The population of Yakutiya’s Ust-Yanskiy District, which covers a swath of tundra three times the size of Switzerland, has dropped from 80,000 to just 8,000 in the past five decades.) Now hundreds, if not thousands, of Yakutiyan men have become tusk hunters, following their ancestors’ routes, enduring the same brutal conditions—and chasing the same Paleolithic beasts.

As primitive as it may seem, the tusk rush is driven not by ancient callings but by powerful modern forces: the collapse of the Soviet Union and the ensuing frenzy of frontier capitalism, the international ban on trading elephant ivory and the search for alternatives, even the advent of global warming. Rising temperatures helped seal the mammoths’ fate near the end of the last ice age by shrinking and drowning their grassland habitats, leaving herds stranded on the isolated islands where Gorokhov now hunts. Today the thawing and erosion of the mammoth’s permafrost graveyard—and the rush of tusk hunters—are helping bring them back. Long after the first largely intact specimens were pulled out of the Siberian tundra in the 1800s, the drumbeat of discoveries is quickening. In September 2012 an 11-year-old boy on Russia’s Taymyr Peninsula stumbled upon a well-preserved adolescent mammoth, one of its ancient limbs sticking out of the half-frozen sediment.

Read more of the original article at National Geographic Magazine

Imagine if humans overnight simultaneously vanished from the face of the Earth.

If intelligent beings came to examine the Earth a million years hence, would they find evidence our species ever existed?

It sounds like the beginning of a science fiction film, but it is a serious question scientists are pondering this year.

In 2016 the International Commission on Stratigraphy will meet to consider whether humans have made an impact on the fossil record.

Today, in the journal Science, a group of eminent scholars are arguing we have entered a new geological age, and they are pushing for the commission’s recognition.

One of the authors, Australian National University’s Professor Will Steffan, said: “When stratigraphers look at what is forming in the sedimentary record — what will be the rocks of tomorrow — they see all sorts of things that are decidedly different and occurring around the globe at around the same time.”

“From their criteria, they can see a change occurring and this would be a new geological time period,” he said.

Here are 10 ways the scientists say humans have left their imprint on the fossil record.