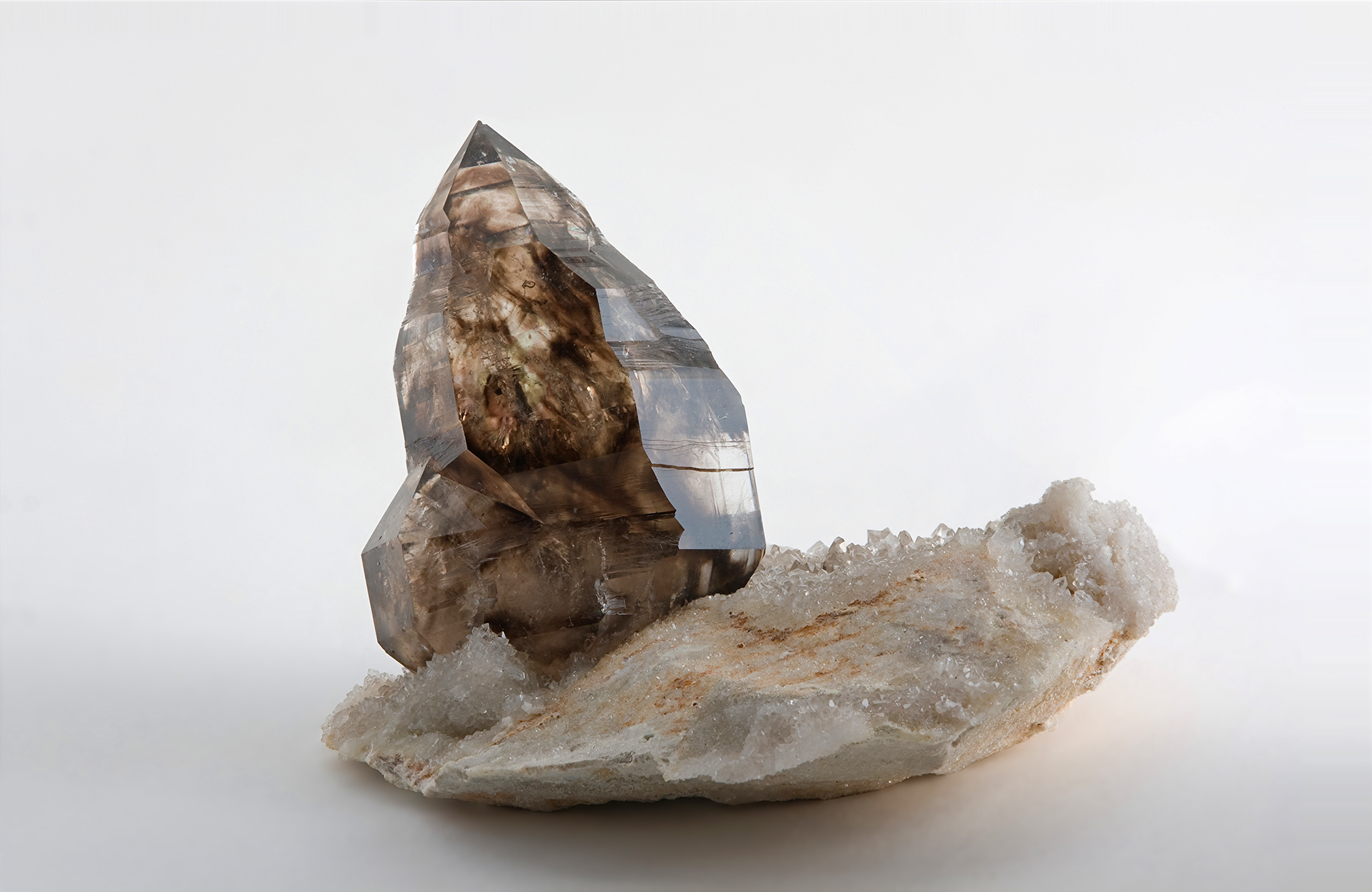 Quartz (SiO2) is a mineral found all over the world, used in jewellery making, electrical engineering and spiritual practice alike. Depending on how the crystal formed, Quartz can present in a variety of ways, each with their own rich history of uses in various cultures. We’ve compiled a list containing just a few of the world’s most beautiful varieties of Quartz.

Clear Quartz, also called rock crystal, is a naturally occurring crystal found worldwide in igneous, metamorphic and clastic rock formations. It is transparent and glassy, and used in jewellery-making and engraving arts, as a spiritual talisman symbolising clarity and simplicity, watchmaking, clockwork and in electrical engineering due to its piezoelectric capacity.

In contemporary spirituality, clear Quartz is associated with the crown chakra, located at the top of the head. The glassy quality of the crystal corresponds with energetic focuses of enlightenment, self-improvement and transcendental meditation.

Smoky Quartz is given its grey, brown or black colour by the presence of aluminium impurities in the composition of the crystal. Historically, the variety was common in the Cairngorm region of the Scottish Highlands, and was also called ‘cairngorm.’  Gamma radiation from natural sources such as Granites often creates the smokey effect.

In contemporary spirituality, Smoky Quartz is associated with the base or root chakra, located at the base of the spine, coccyx or tailbone. The black, grey and brown tones loosely parallel the red colour of this chakra. The dark and inky nature of the crystal corresponds with energetic focuses of stability, grounding and security.

Unlike clear quartz, Milky Quartz appears opaque, with colouring ranging from cream, white, bone or porcelain. It is coloured by pockets of gas and fluid sealed into the crystal during formation..

Amethyst is a purple, violet or lilac coloured form of Quartz. It is formed by the synthetic or natural application of heat to quartz with iron deposits, or ferric impurities. It is most commonly mined in Brazil and other quarries in South America and has a long history of use as a precious and cardinal gem.

Alongside clear Quartz, amethyst is associated with the crown chakra. However, amethyst has more cultural and historical associations with the idea of mental clarity than clear quartz, which simply colour-matches the chakra system.

The Ancient Egyptians used Amethyst as a jewel in which to carve scarabs. They then interred the carved gems with mummified pharaohs to encourage resurrection. The Greeks and Romans carved drinking goblets, or carried Amethyst pendants to protect themselves from hangovers, believing the crystal could fortify their faculties and prevent excessive inebriation while drinking wine. The Catholic Church continued this association with clarity and sobriety, and linked Amethyst as a manifestation of divine connection with God; this belief then continued amongst European royalty, exemplifying the association between the colour purple and regal powers.

Citrine is a yellow/orange form of Quartz, ranging from deep red-based oranges or muddy browns to even lime-like yellowy greens. Like amethyst, it is typically transparent, and is formed by the synthetic or natural application of heat to Amethyst with iron deposits, or ferric impurities. It is also predominantly mined in Brazil, primarily in the mines of Rio Grande do Sul. Naturally occurring citrine is rare, due to the specific heats required to tinge the colour of the Quartz to this colour, and it is far more common to encounter synthetic citrine.

Cut and polished citrine, natural or synthetic, is very similar in appearance to topaz, and are only different in chemical composition and level of hardness. Where citrine, as a form of Quartz, has a hardness of 7, topaz has a hardness level of 8.

Historically, Citrine was thought to be associated with good luck and fortune, possibly due to the proximity of the colour to gold. There is an additional association in contemporary spirituality between the yellow and gold tones of citrine and the solar plexus chakra, the energy point in the body responsible for ambition, confidence and expression.

Ametrine, trystine or bolivianite is a bicoloured gemstone, a hybrid mix of the purple from amethyst and the yellow and orange tones from citrine. Ametrine is almost exclusively mined in Bolivia, and occurs under ‘unusual conditions’ (Vasconcelos et al., 1994).

Ametrine is formed within a quartz deposit, rich in the ferric impurities (or iron deposits) that grant amethyst and citrine their brilliant shades of violet and yellow, receives heat treatment in a natural, geothermal or synthetic state at inconsistent temperatures across the geode. This inconsistent level of oxidation results in a vivid gradient of purple and yellow across a single gemstone.

This shimmering, translucent form Quartz is named for the deposits of Mica included in composition of the crystal. Mica is a particularly brittle sheet silicate, often used in powdered cosmetics for a metallic, shimmering quality. When the crystal is formed, traces of mica will incorporate into the Quartz, yielding a glittering effect called aventurescence.

Due to these trace amounts of mica, Aventurine is a softer crystal, ranking at 6.5 rather than the typical score of 7 on the Moh’s scale. Green Aventurine is typically mined in India, while more diverse colours can be found in South America and Russia.

Further, Aventurine, Rose Quartz and Prasiolite all correspond to the heart chakra, the green energy-wheel located alongside the heart. This chakra is responsible for energetic focus and flow of love, compassion and emotional balance.

Rose Quartz ranges in pink tones, from a pastel pale pink to a rosy red. Rose Quartz may be transparent, with only a suggestion of pink colour, or it may be an opaque, solid-coloured crystal. Where amethyst, citrine and ametrine are coloured by the presence of iron deposits, or ferric impurities within the crystal structure, Rose Quartz is coloured by trace amounts of Titanium, Iron or Manganese.

When cut and polished, some samples of Rose Quartz may reveal a six white streaks, concentrating in the centre, resembling an asterisk. This is called asterism, and crystals with this property are also called star stones.

This phenomenon occurs in two types; the first, epiasterism, is present within the crystal itself due to mineral concentrations during the formation of the stone, while diasterism, is cut and polished into the crystal to create a stronger effect when viewed under light. Rose Quartz experiences both forms of asterism.

Rose quartz is an incredibly popular form of quartz, and is used extensively in jewellery making, major and decorative sculpture, cosmetics, skincare and wellness products. In 2016, it was named alongside a pastel blue tone called ‘serenity,’ as Pantone’s Colour of the Year.

From the Greek ‘πράσινο’ or ‘prasino,’ meaning ‘green,’ derived from the Ancient Greek word for scallions and leeks, prasiolite is a minty green variety of quartz. Other names for the crystal include vermarine, green or greened amethyst, lime citrine or simply green quartz.

It is typically transparent, and has historically been mined in Brazil, however almost all ore veins in this mine have been depleted. It is currently mined in Poland, Canada and California.

It is coloured green by geothermal heat treatment; as most forms of amethyst quartz will either yellow into citrine or brown into smoky quartz, prasiolite is incredibly rare in natural formations. It is more reliably created in a synthetic environment in order to control the temperatures used on the crystal, however synthetic prasiolite is typically darker in shade compared to its pastel-toned, natural counterpart.

Named after French paleontologist Eugène Dumortier, Dumortierite quartz is a blue form of quartz with inclusions of an aluminium boro-silicate mineral. In this manner, it is not wholly a piece of quartz with minor impurities, as the coloured varieties described above have been. Instead, it is quartz with copious amounts of dumortierite deposits, which colour the crystal blue. The Moh’s hardness level is still 7, like other forms of quartz, but the density of the crystal is much higher than the standard for quartz (2.65), sitting at 3.3-3.4 sp. gr.

It is mined across Europe, Canada, South America, Central Africa and Sri Lanka, and found in Aluminum rich metamorphic rocks.

Chalcedony is the name of a crystal, and a type of crystal family both similar to and distinct from quartz.

Chalcedony is a cryptocrystalline form of silica, in which the crystals quartz and moganite are so tightly fused and composited together that they aggregate into a silica structure. Unlike quartz, which is arranged in tetrahedral lattices, the chemical structure of chalcedony crystals varies between trigonal and monoclinic structures.  Chalcedony has a Moh’s hardness number of 6-7, unlike quartz which is consistently a 7. It is waxy in lustre, unlike quartz which is vitreous. However, it is still a form of quartz, and so it is briefly included on this list.

Chalcedony includes agate, carnelian, onyx, jasper and tiger’s eye. The colours in chalcedony stones are often more solid than their true quartz counterparts, and used for jewellery making and decorative purposes due to their boldness.